If you happen to be on a vacation or on a work trip in Italy, we suggest that you dedicate one day to the Naples limo tour and discover the charm of the gulf of Naples from the Mount Vesuvio.

Departing from Rome with your personal driver you will reach Naples in about two hours.

The city bound to the legend of the mermaid Partenope is waiting for you to make you discover its centuries of history testified by great examples of architecture and works of art.

Between the Gulf of Naples and the famous Vesuvio which destroyed Pompei in 79 A.D. you will surely be able to have an unforgettable day.

With this Naples limo tour you can also decide to spend half a day in Naples and the rest of the time to visit other wonders near Naples, such as Pompei and Ercolano or Sorrento. Otherwise, you can head to the peninsula of Amalfi Coast visiting Amalfi and Positano

Tiber Limo Service will allow you to visit the best of Naples: from one of the most beautiful and bigger squares of Italy, to the most suggestive panoramic views of the city, not forgetting to take you to places where you can admire and take pictures of the Gulf of Naples.

You will be able to choose among the numerous cultural attractions suggested by Tiber Limo Service, and if you want to see all of them, your personal driver is at your disposal to let you to enjoy the tour.

We suggest you to choose, based on your preferences, between these:

Spaccanapoli is one of the oldest streets in the city, in fact the current street follows the decumanus of Roman origin. Crossing this street means retracing the millenary history of the city. Your driver will follow you in complete safety along a path made up of churches, stalls, artisan shops displaying the classic Neapolitan nativity scenes.

Sculpted by Giuseppe Sanmartino, the Veiled Christ is one of the most famous sculptures in the world.

“he would have been willing to give 10 years of his life just to be the author of such a masterpiece”.

Describing it does not make the astonishment felt in finding oneself in front of the face of Christ, so we advise you to consider this work as an integral part of the Naples limousine tour.

If in the Naples limousine tour you did not plan to visit Pompeii and Herculaneum, preferring the combination with the Amalfi coast, Tiber Limo Service recommends a visit to the archaeological museum.

With a glance in this square you can admire many artistic and architectural works: 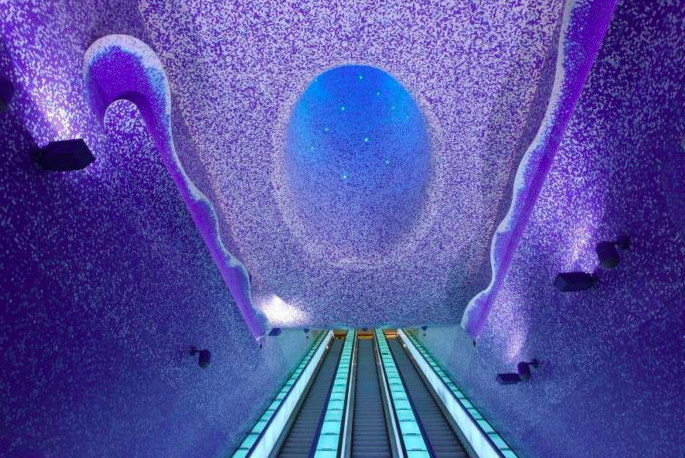 It is not just any metro stop, the one we propose you to visit. The art metro is a series of 15 stops on the Naples metro linked by an artistic theme.

The stations exhibit about 200 works of art by young local architects and world-famous artists.

Famous for its monumental double flight staircase, the Spanish Palace is an example of Neapolitan Baroque architecture.

If you are a fan of the Sense8 series you will surely recognize it!

Italian pizza is certainly famous all over the world, but Neapolitan pizza is the best in Italy. A culinary experience not to be missed!

Accordance with our customer service, you can customize the full day tour, visiting the mentioned places with a different combination and sequence. Our staff will be glad to suggest you in your choose.

Along with Naples, you can also choose to visit Pompeii, Herculaneum, Sorrento or the Amalfi Coast, with Amalfi and Positano.

Price 1 up to and including 2 people Add €40 for each additional passenger, up to 7 Contact us to receive quote for more than 7 passengers