Appian Way awaits you. Discover the most suggestive Roman road with Tiberlimo. On a half-day tour, you will be able to see the Roman Aqueducts and walk along the road that connected the city of Rome to Brindisi

Half day tour of Rome to Appian way and aqueducts

Do you want to join a Appian Way tour?

We propose to broaden your knowledge with a four-hour tour starting from the main access point of the Appian Way, and specifically from its entrance into the Roman walls, driving in to the main area (Appian Park) where the original cobblestones are preserved.

After the Appia Way tour, our driver will show you the park of the Roman Aqueducts. The Romans built numerous aqueducts to bring water from distant sources to Rome.

It will interest and enlighten you to learn how the Romans used the force of gravity to make water flow. A part of the 11 Roman aqueducts are still in use in our modern times.

Tour will start from your address or hotel at around 8.30am and will end at any address you request for the drop off around 1.00pm. 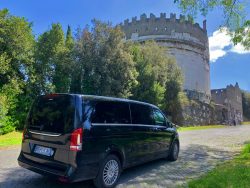 We provide you with a brief introduction to the Appian Way.
The Via Appia was built between the end of the 4th century and the beginning of the 3rd century. BC, obviously by the Romans, to connect Rome to the city of Brindisi. In fact, in Brindisi there was the most important port for the trade routes between Ancient Italy and Greece.

The Via Appia was considered by the Romans the Regina viarum (queen of the roads) and remains today one of the greatest civil engineering works of the whole ancient world.

In conclusion, our driver will accompany you all the time in this blast from the past!

This tour, furthermore, can be combined with Rome by Night

Please join us for this unique and eye-opening experience.

Skip the line tickets can be bought online at the official websites. We will send you all information. Current price is Euro 14 for Colosseum (valid two days and includes also Roman Forum and Palatinum)

We don’t charge for children under two years old (at most 2 children don’t pay).

All prices are in euros. Tiber Limousine Service accepts payments by PayPal, by credit card or in cash in euros to the driver at the end of the shore excursion.

Price 1 up to and including 3 people Add €30 for each additional passenger, up to 7 Contact us to receive quote for more than 7 passengers

Do you need more information?